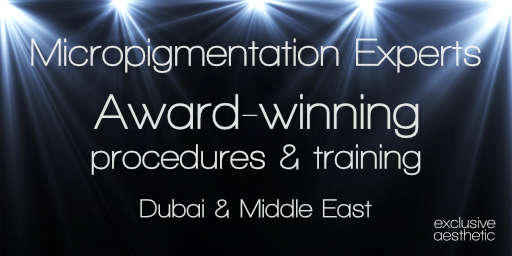 Eyebrow Tattoo is available by Exclusive Aesthetic, the micropigmentation specialists to the Middle East.

Exclusive Aesthetic, formally Exclusive Beauty, is headed by Candice Watson and has delivered semi permanent makeup and medical micropigmentation treatments to the highest level in Dubai since 2009.

Eyebrow Tattoo as a name for a makeup procedure is slightly misleading. The word tattoo makes one think of permanent body tattoos and is assumed permanent body art pigments and machines are used to perform a makeup treatment on the face.

We find the thought of using a body art tattoo machine, needles and pigments for a makeup procedure horrific however it does happen. The results are the horror stories we have all heard about where a person went for the cheap deal and got “Spock” like eyebrows that turned blue or green after a period of time.

The word Tattoo is misleading

We must emphasise – Even though the word “tattoo” is used for a makeup procedure on the face, the procedure must not be permanent like a body art tattoo. Cosmetic Tattooing should last for a number of years usually 2 to 3 years.

Our Eyebrow Tattoo treatment uses the latest micropigmentation machine, needles and non-permanent pigments to enable us to perform eyebrow tattoo to the highest level.

Micropigmentation machines can be adjusted to pierce the skin very precisely causing the minimum amount of trauma to the skin. Reduced trauma to the skin results in less pain. We also use a topical numbing cream resulting in our eyebrow tattoo treatments being likened to eyebrow plucking.

The needles we use allow adjustment of depth so the pigment is applied to the exact correct depth to ensure our eyebrow tattoo treatments are semi permanent lasting 2 – 3 years. However, in the Middle East, we recommend a top up every 12 to 18 months to keep the pigment colour looking fresh.

To inquire about Eyebrow Tattoo or to make an appointment please contact us through our contact page by clicking HERE.

For details on our Training for semi permanent makeup and medical micropigmentation please click HERE.

Our Dubai semi permanent makeup treatments include eyebrow correction and application, eyeliner, top-bottom or both, lip liner and full lip colour and blush.

The most popular treatment area is the eyebrows, many of our clients want corrections to their eyebrow loom or a solution to sparse or over-plucked eyebrows. To appeal to a wider selection of people we offer 3 different looks for our Dubai semi permanent makeup procedures:

Natural Hair Stroke is exactly as its name implies. A super-fine needle, the thickness of a single hair, is used to implant pigment beneath the brow line. Varying pigment colours are used to give a very natural 3D look as required.

Dusting is again one of our natural looks for eyebrows. A dusting needle is used to apply pigment in a dusting effect similar to brow powder. The result is a wash of colour beneath the brow.

Exclusive Aesthetic – the micropigmentation specialists to the Middle East

For more information on our services including Dubai Semi Permanent Makeup, please email us at info@exclusiveaesthetic.com.

General information can be seen HERE.

More information on our eyebrow treatments can be seen HERE.

We also offer permanent makeup removals. If you have had a treatment by another practitioner and you would like to correct or remove it completely then our removals system is the best available. See HERE for more information.